Gearing Up for the Taiwan Open 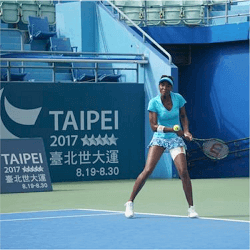 The Taiwan Open On the Horizon

The first ever instalment of the Taiwan Open was held in 2016 and was a hit with local and international sporting fans. The event is a women’s tennis tournament organized by the WTA and part of the International tournaments of 2016.

Played on outdoor hard surfaced courts, the first Taiwan Open was played at Yangming Tennis Centre in Kaohsiung, Taiwan. The tournament was held from the 8th up until the 14th of February 2016. With 2017 just around the corner, anticipation is building for the second tournament in this elite series.

The World Tennis Association have moved the Taiwan Open to the capital of Taiwan, Taipei, effective from 2017.

The 2017 instalment of the Taiwan Open will leap into action on the 30th of January 2017. Set for the sea of spectator stands, accommodating ten thousand fans, the 2017 Taiwan Open will be held at the indoor, Taipei arena.

Tennis Is Branching Out

Tennis is a game of discipline, respect and inner composure. The game was born in England. The oldest Grand Slam on the calendar is Wimbledon and is often referred to as the home of tennis.

With just four major grand slam events including the Australian Open, The US Open, the French Open and Wimbledon, tennis has remained a fairly closed off affair.

The WTA has outlined a progressive path by incorporating another major event into the calendar.

The Taiwan Open will charter a path for growth and dynamism in the sport. Young upcoming hopefuls will be given the opportunity to learn and grow in the game, developing skills and ultimately making way for newcomers in the tennis domain.

It is an exciting time for tennis in Taiwan with the region producing real quality players including Su-Wei Hsieh, Chan Hao-Ching and Chan Yung-Jan.

With space for ten thousand spectators and endorsed under the WTA, the Taiwan Open lends itself to a host of thrilling wagering opportunities akin to other majors on the calendar.

With a five hundred thousand USD prize up for grabs, the Taiwan Open is dedicated to attracting heavy weight professionals to her shores. A lucrative purse that is set to grow as the tournament gathers momentum.

Venus Williams won the first ever Taiwan Open. The final was contested between Williams and Japan’s Misaki Doi in an exciting display of big hitting tennis.

The WTA has announced that the single event player draw of the Taiwan Open features twenty three players with twenty one players ranked in the top one hundred in the world.

The rankings include former world number one Jelena Jankovic from Serbia who is now ranked world number fifty-four.  The tournament also includes a local wildcard player, Lee Ya-hsuan. This is good form from the WTA promoting diversity and growth within the game.