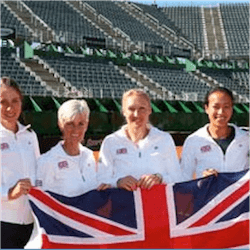 Great Britain has been placed in Pool C of this year’s Fed Cup draw featuring the European and African Group 1 teams. The other draws for the group include Portugal, Turkey and Latvia.

The pool matches will start on the 8th of February with the winner moving on to a play off.

Turkey may be a worry for Great Britain as they defeated the Brits two years ago. Latvia on the other hand features the world no 38 Julia Ostapenko. If the British team manages to overcome the challenge, they will be facing Bosnia, Hungary and Croatia in the play offs.

Britain has a wild card up their sleeve if they can have Johanna Konta on their side. She has been named as part of the 4 player team that will compete in the Fed Cup but Konta has previously withdrawn from the Fed Cup to recover after her Australian Open matches.

The other three players are Laura Robson, Jocelyn Rae and the talented Heather Watson.

Meanwhile the German Angelique Kerber, the no 1 ranked player in the world, has pulled out of the Fed Cup.

She would have faced the American Team in Hawaii in February, but the weekend before that sees her defending her Grand Slam title in the Australian Open.

She has cited travel conflicts that will mean she will not be able to travel to the venue on time. She has commitments in Doha and Dubai after the Melbourne Open.

Kerber has played in the Fed Cup and represented Germany since 2007, even playing two rounds in 2016.

The Captain of the German team, Barbara Rittner has said that she fully understands Kerber’s decision. She did also add that without Kerber they would definitely be the underdogs in their Group match.

Potential replacements for Kerber will not come close to her skill. On the cards is Laura Siegemund, 27th ranked in the world, Annika Beck at 53rd, Andrea Petkovic at 55th and Julia Goerges at 56th.

Waiting for the US Squad Announcement

The American captain, Kathy Rinaldi has not revealed her squad yet. 8th ranked Madison Keys is already an uncertain pick as she is currently recovering from a wrist injury.

Ideal picks would of course be Venus and Serena Williams, but she can also pick 46th ranked Lauren Davis who recently won her first career title in Auckland. America also has the 38th ranked player Coco Vendeweghe and Christina McHale who is ranked 43rd.