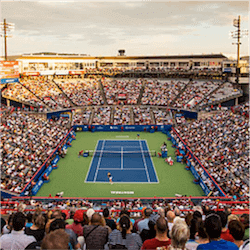 Jack Sock was one game away from taking an early exit from the Paris Masters. Today, he stands as the first American to win a ATP World Tour Masters 1000 singles trophy since Andy Roddick back in 2010. Sock beat qualifier Filip Krajinovic 5-7, 6-4, 6-1 in what was arguably the most important finals match of his career. He has also earned himself a spot at the ATP Finals in London.

Before coming to Paris, Sock was not even thinking of London, lingering in 24th in the race. Now he will be taking the trip to England where he will be competing against the likes of Roger Federer and the other six internationals who made it through from the ATP race. Earlier in the competition, Sock found himself 5-1 down in the third set against Britain’s Kyle Edmund. It looked to be all over for the American but somehow, he found a way out of the hole and fought back.

Sock kept his momentum going and went head-to-head against the Serbian 77th seed in the final. Winning the Paris Masters has pushed Sock to number 9 in the world rankings and he received a check for nearly $1 million for his efforts. This was his fourth career title and certainly not his last. When asked how he is going to approach the finals in London, Sock replied that he is going to swing big, play his game and enjoy the moment.

In Paris, Sock sealed the victory on his very first match point when Krajinovic sent a wayward backhand a bit too long. Realising he had won, Sock fell onto his back with his hands covering his face. He then jumped up and climbed into the seating area to celebrate with his team. His opponent, Krajinovic may have been disappointed with the loss but the Serbian was the first qualifier to reach a Masters Final since Jerzy Janowicz in 2012. Krajinovic has only played the challengers circuit before, winning five finals before coming through the qualifying rounds.

Against Sock, Krajinovic seemed to run out of steam in the third set. Speaking to the press, he said he didn’t play aggressively enough, as Sock started playing better throughout the match. Regardless, the Serbian will jump from 77th to number 33 in the World Rankings.