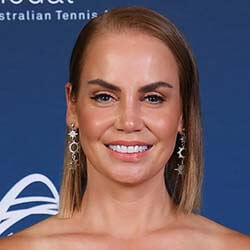 Former tennis world No. 4 and Australian Open commentator and analyst Jelena Dokic has given body critics a piece of her mind, saying she’s been at the receiving end of unnecessary and cruel comments about her physical appearance. The former star posted a lengthy retort about her recent weight gain on social media platform Instagram.

Dokic revealed comments made about her weight were nothing short of sexist and had caused feelings of anxiety and depression to resurface. She added that the weight she had recently gained had been the result of gruelling periods of isolation amid Melbourne’s stay-at-home orders.

She also went on to reprimand those who had only negative things to say to her, and reminded body shamers of the fact that weight does not determine an individual’s worth.

The former star lost a remarkable amount of weight in 2018-19. She shed nearly 40kg during her weight-loss campaign after reaching an all-time high of 120kg. She revealed in her 2018 biography “Unbreakable” how she had battled a losing fight with maintaining a healthy weight after retiring from an intense physical regime as a professional tennis player. Her autobiography also revealed how she had twice survived life as a refugee, and how she had survived what she referred to as a “tennis dad from hell” in her father, Damir Dokic.

The former AO star, now 37, made a super memorable run for the Open’s final eight back in 2009, and is now a core part of Nine’s coverage of this year’s competition.