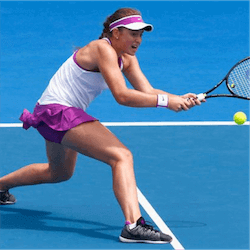 Jelena Ostapenko, the unseeded Latvian tennis star has become the first teenager to reach the French Open woman’s semi-finals in the last 10 years. The 19-year-old booked her spot in the semi-finals with a shock victory over former world number one, Caroline Wozniacki. Ostapenko was understandably nervous going into the match, taking a while to warm up. After losing the first five games of her first major quarter-final, the young Latvian managed to pull it back and win the match 4-6 6-2 6-2.

Speaking to the press, Ostapenko said that she was extremely happy with the result and couldn’t quite believe it. The world number 47 will now face Timea Bacsinszky, the Swiss 30th seed champion who defeated France’s Kristina Mladenovic 6-4 6-4 in her quarterfinal match. The two will meet on Thursday when they both will jointly celebrate their birthdays. The pair eventually won their quarterfinal matches after a four-hour rain delay, which disrupted the women’s last-eight ties as well as Nadal’s and Djokovic’s quarterfinal matches.

Meanwhile, Ostapenko has become the first teenage tennis player to reach the French Open semi-finals since Ana Ivanovic achieved the feat in 2007. At the same time, she is the first teenager to feature in a Grand Slam semi since Madison Keys made her appearance at the 2015 US Open. Speaking about the rain delays, Ostapenko said that is was a tough match where the players had to leave the court twice during the play. Ostapenko said she knew Wozniacki was a tough opponent and she had to stay aggressive is she wanted to stand any chance of winning.

A New Champion on the Way

That being said, Wozniacki has never been able to progress past the quarterfinals in the French Open. With Serina Williams pregnant and a number of top-seeded players finding and early exit, it seems the French open will see a first-time women’s singles champion come the finals. Of the final eight players left in the tournament, Wozniacki had the best pedigree. Before going down to Ostapenko, she was tipped to claim her maiden French Open title.

The difference in experience between Wozniacki and Ostapenko was massive. The Latvian youngster played defensively for the first five games before finding her feet. It was too late to save the first set though which Wozniacki took 6-4. Ostapenko’s performance was more clinical in the second set. She served out the set and grew more confident with every game. In the final set, Ostapenko broke Wozniacki’s serve in the fifth game and went on to claim the final set and match, becoming the first Latvian woman to reach a Grand Slam semi-final in the modern open era.