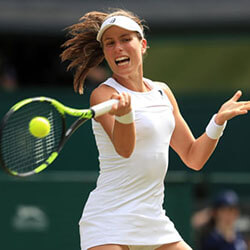 British number one Johanna Konta has advanced to the quarterfinals of the Italian Open after winning 6-2 6-4 against Venus Williams, her second match for the day. 27 year old Konta returned from a set down to beat world number eight Sloane Stephens before she took on seven time Grand Slam champion Williams, who is ranked 50th in the world.

Williams set set back by injury, and Konta finished the game in 73 minutes. She is next expected to take on Marketa Vondrousova for the last eight to be played in Roma after the Czech player beat Russian Daria Kasatkina. Having made a comeback from a set down to beat world number two Simona Halep earlier in the same day, 19 year old Vondrousova was taken to three sets against Kasatkina, who recorded a 7-5 2-6 6-2 victory in tow hours and 13 minutes.

Williams received a walkover during the third round after he sister Serena was forced to withdraw due to a knee injury. The 38-year-old American player who won all three of her past three meetings against Konta, which included the semi final of the 2017 Wimbledon. Naomi Osaka, the current world number one, recorded successive 6-3 6-3 wins over both Mihaela Buzarnescu and Dominika Cibulkover, setting up a last eight meeting where she will be facing world number four Kiki Bertens. The former Wimbledon and French Open winner Garbine Muguruza withdraw from her match against Azarenka due to a thigh injury.