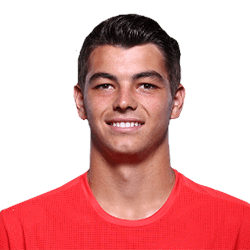 Top seeded John Isner has lost to American Taylor Fritz 7-6(3) 7-6(5) in the second round of the Auckland Classic.

Isner, known for his big servers, is currently ranked 10th in the world, and managed to fire off 26 acres despite struggling during his second serve as Fritz took the lead and edged the match in an hour and 39 minutes.

Talking about the match, world ranked number 50 Fritz said that he really wanted to get the win on him, and the he knew he could. H added that they had many close points, and it feels really good to get through the match with a win.

The 21 year old converted one out of three break points and managed to save three on his serve. Adding to his statement, Fritz said that he likes to think that one of his strengths is being able to play under pressure and playing bigger moments well, and that he’s happy to start the year playing well under the pressure and being able to handle the big moments well.

Fritz is set to take on British Cameron Norrie, who previously beat Joao Sousa 7-6(5) 6-4. American Tennys Sandgren has also advanced to the quarter-finals of the tournament after besting third seeded Italian Marco Cecchinato  6-3, 6-3. and set up a match facing Leonardo Mayer. The Argentinian saved five out of six break points, and beat Matteo Berrettini  5-7. 7-6(5) 6-3.