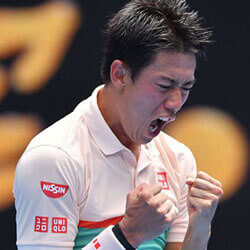 Kei Nishikori, eighth seeded, survived through a fightback from Ivo Karlovic to win the final set tiebreak, and has moved forward to the third round of the Australian Open.The Japanese player claimed a two set lead before Karlovic, 39, who served a total of 59 aces, recovered and forced a decider while playing on the Margaret Court Arena. Nishikori held on to his nerve as he edged out the Croatian 6-3 7-6 (8-6) 5-7 5-7 7-6 (10-7) in a game that lasted three hours and 48 minutes.

Nishikori managed to save three break points of 4-4 in the final set, and was 6-7 behind in the tie break as Karlovic stood on the edge of becoming the oldest man ever to reach the third round since Ken Rosewall in 1976, who was 44 at the time. Nishikori, in a statement after the game, told reporters that it was a tough match that could have easily gone either way, and that his opponent almost had the win. He added that he put most of his focus on the last points, and that he is very happy to win after both had player a match of great tennis.

Nishikori, who is a three-time quarter finalist at Melbourne Park, will be facing either Portuguese Joao Sausa or Germany’s Philipp Kohtschreiber for the third round of the annual Australian event.