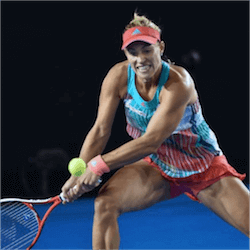 Number 1 on the WTA rankings, Angelique Kerber won’t be beefing up the German team for their first-round Fed Cup 2017 encounter with the USA in Hawaii on February 11-12. Kerber is currently defending her title as the 2016 Australian Open women’s singles champion in Melbourne.

The next tournament New Zealand betting fans can see her play in is the 2017 Qatar Total Open in Doha from February 13-18, followed by the Dubai Duty Free Tennis Championship from February 19-March 04. To compete in Round 1 of the Fed Cup, she would have had to shift through several time zones after the Australian Open to play in Hawaii, and then fly the other way to Qatar with a gap between tournaments of less than 24 hours.

As a result, she told reporters, she and the team coach agreed it was impractical for her to go to Maui, where Germany’s Fed Cup team is scheduled to play the USA at the Royal Lahaina Resort, and then try to get back to Qatar rested and in time for the Doha tournament.

Naturally, Kerber is the top seed in the singles draw in Doha. However, the tournament has been going since 2001, sparked by a growing interest in women’s sports throughout Qatar. It is now a prestigious event on the WTA Tour, with prize money of US$2,517,250. It is held every year in Doha’s Khalifa International Tennis and Squash Complex.

The growth in the tournament’s profile is evidenced by the quality of the field it attracts. Of the 32 players in the 2017 singles draw, seven are ranked in the WTA Top 10. Poland’s Agnieszka Radwanska is currently ranked No. 3, Czech Karolina Pliskova, Slovakian Dominika Cibulkova and Spaniard Garbine Muguruza are at Nos. 5, 6 and 7 respectively, and Russian Svetlana Kuznetsova at No.9 and Britain’s Johanna Konta at No.10 complete the list of top seeds.

So Kerber, who was knocked out of the 2016 Qatar Total Open in the second round by China’s Zheng Saisai, faces plenty of stumbling blocks between Round 1 and the title. Savvy punters will be watching the rest of the Australian Open carefully, as well as the early rounds of the Doha tournament, to spot the players with winning potential.