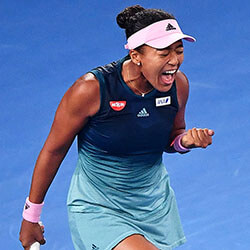 Naomi Osaka, Simona Halep, and Petra Kvitova have all managed to move on to the quarterfinals of the Madrid Open. World number one Osaka claimed victory over Belarusian Aliaksandra Sasnovic 6-2 6-4 to advance to the Madrid last eight for the first time in her career, while Halep beat Viktoria Kuzmova 6-0 6-0 in 45 minutes.

World number two Kvitova defeated French player Caroline Garcia 5-3 6-3. Osaka, who is the winner of both the US Open and Australian Open will now be taking on Belinda Bencic, while Halep is et to face Australian ninth seeded Ashleigh BBarty. Halep, who recently beat British number one Johanna Konta during the second round, is hoping that she will be able to win the title for the third time after she won in both 2016 and 2017.

Talking about the upcoming games, the Romanian player said that she was Kuzmova’s best match, and that maybe she had been nervous before the beginning of the match, Halep continued, saying that it’s a big tournament and sometimes it can be difficult to face the top players, and that she herself has been in that position, and has tried to play the best tennis she could nevertheless. World number eight Sloane Stephens has also advanced in Madrid after she bested Chinese Saisai Zheng.

The American was a set down before her game against Zheng with 3-6 6-3 6-2, and has set up a quarterfinal game against Petra Martic.