Marcus Daniell joins the field at the Wellington Open 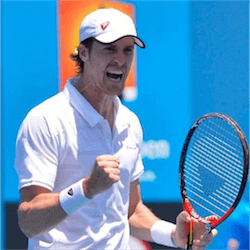 Local New Zealand tennis star Marcus Daniell has narrowly missed out on winning his fourth ATP doubles title in Brazil. The number two seeded player along with his partner Marcelo Demoliner were beaten in a super tie break by the Brazilian team of Andre Sa and Rogerio Dutra Silva. For New Zealand tennis fans, it is not all bad news though. It was announced this week that Daniell has confirmed his spot amongst a strong field in the upcoming Wellington Tennis Open tournament.

The 2017 Wellington Open looks set to have one of the best field in years. The tournament which takes place from the 30th of March to the 2nd of April will see Marcus Daniell pitted against the likes of Finn Tearney and Rubin Stratham. Daniell, the world number 43 doubles player and New Zealand Davis Cup representative rarely gets a chance to play at home where he grew up playing tennis as a youngster. The Wellington Open also fits perfectly into his schedule linking up with the Davis Cup tie against Korea one week later in Auckland.

Speaking to the press, Daniell said that he spent a lot of time at the Renouf Center as a junior and that it holds special memories for him. Daniell hopes the tournament gets the public attention it deserves and creates enthusiasm for the sport in Wellington. The 2016 Wellington Open saw Rubin Stratham claim the honours, beating out Finn Tearney in the final. This year, they will have strong competition from Daniell as well as top seeded players such as Sam Matherson and Rhett Purcell.

For local tennis fans, the top domestic players include Riki McLachlan, an up and coming doubles players with an international ranking as well as Sebastian Lavie who was a Davis Cup representative. The Tournament will also see local New Zealander Ajeet Rai who holds a spot in the to 80 juniors in the world and a local favourite. The woman’s competition will be highlighted by Julio Glushko, the world No 249 who held made it through to the third round of the French open in 2015. Her main rival will be Leela Beattie, 2016 finalist and a former winner of the Wellington Open.