Maria Sharapova Crashes Out of US Open 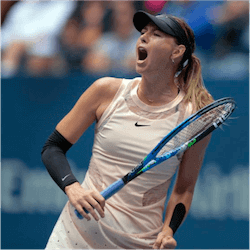 Sharapova Out of the US Open

Maria Sharapova has crashed out of the US Open in the fourth round. The five-time Major champion tried desperately to overcome her Latvian opponent but to no avail. Sharapova even resorted to switching over to her left hand to mix things up, but fell short, adding another three-setter to her list of woes.

Coming up against 16th-seeded Anastasija Sevastova, Sharapova was fairly confident that she could keep her Grand Slam comeback on track after a doping suspension forced her out of the game for over a year. However, Sevastova got the better of her in the first set, taking it 7-5. Sharapova managed to pull it back in the second, winning 6-4. By the time the third set got going, Sharapova was showing signs of wear. She lost the final set 6-2, ending her US Open campaign.

In the last four matches, this was the third time that Sharapova went to three sets and failed to go the distance. She was also dealing with a right-hand injury that was taped by her trainer in the final set. With her timing off, Sharapova dropped 13 out of her first 14 points in the final set. If we take a look at the numbers we can see that the Russian finished the match with a total of 51 unforced errors compered to Sevatsova’s 14.

Sevastova Through to Quarterfinals

Sevastova was quick on the ball, causing Sharapova to run a lot during the match. Sharapova managed to weather the storm, even switching to her left hand to lob the ball back over the net for one point. She was unable to sustain the pressure though, allowing Sevastova to qualify for the quarterfinals for the second year in a row.

This was the first Major tournament Sharapova has played since the 2016 Australian Open. She tested positive for the newly banned drug Meldonium and was handed a 15-month ban from the sport. She returned in April 2017 with a ranking that was far too low to get into any of the Grand Slams. She tried to get a wild-card invitation for the French open but was denied.