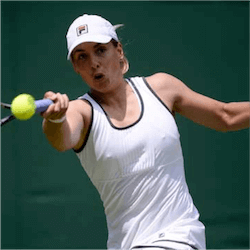 Marina Erakovic Out of the French Open

Marina Erakovic, the New Zealand tennis number one faces an uncertain future after she lost her opening first-round match at the French Open. The 29-year-old Kiwi was beaten in straight sets by American Shelby Rogers who was a quarterfinalist in 2016. Her latest loss continues the trend of the Aucklander not winning a WTA tour level match this year. Her rankings will now continue to slide from where she currently stands at number 144 in the world.

The frustration of losing the match was all the more significant for Erakovic as she was leading the opening set 4 games to 2 thanks to an early break. Rogers managed to break back and force a tiebreaker. Erakovic quickly went 4-1 up in the tiebreaker but lost the next six points to concede the first set in just over 51 minutes. Erakovic was presented with another breakpoint opportunity in the second set but just could not force Rogers off her game.

In contrast, Rogers managed to claim a break in the 10th game, closing out the match in just over an hour and a half. While it was yet another frustrating result from Erakovic, the tennis star says she is nowhere near considering retirement. Speaking to the press she said that it was going to happen sooner or later but not in the foreseeable future. Erakovic said that she still believes that she can compete at the top level and has no reason to think of retirement.

In her match against Shelby Rogers, Erakovic showed aggression early on in the game with big serves and powerful forehand shots. She kept the American at bay, not allowing her to gain any momentum for most of the first set. In a statement to the press, Erakovic said she played the best she could, stuck to her game plan and controlled her emotions fairly well. She felt that she missed out on a few key moments, which led to Rogers taking control of the match.

The first key moment was when she was up 4-2 but didn’t consolidate the break and hold onto her serve. The second point in which Marina let things slip was when she took her foot off the accelerator in the tiebreaker. Finally, in the second set, she had break point and missed a key forehand shot down the line. Erakovic must now turn her attention to the grass court season.