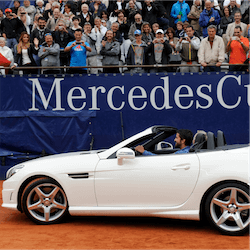 Fighting a gruelling match on Sunday, Lucas Pouille took the 2017 Mercedes Cup home with him after he met Feliciano Lopez in Stuttgart.

It was a tense 3 sets with Pouille winning his second tournament so far this season. The 23 year old French players seem to really have found his footing this season after he won the Hungarian Open in April.

Serving Up A Winner

His 4-6, 7-6, 6-4 win at the Mercedes Open was a decisive victory showcasing his powerful serve.  The first set seemed like a washout for Lopez but Pouille equalised on the second set and then dominated in the third.

Many hopes were on Lopez as most fans thought his power and endurance would give him the edge in the match. Unfortunately the Stuttgart court surface did not give him any advantage in his usual serve and volley style attack. Instead Pouille’s 29 Ace serves and his accurate shots eventfully overcame Lopez’ assault.

Pouille and Lopez made their way into the finals after Pouille defeated fellow Frenchman Benoit Paire in a decisive 7-6,7-5 match. Lopez defeated German Mischa Zverev 6-7 ,7-6, 5-7.

The two players have had an amazing run at this year’s Mercedes Cup Tennis tournament. They survived tennis greats like Timo Haas and Roger Federrer to make it all the way to the finals.

On the doubles court it was Brazilian Bruno Soares and the Scotsman Jamie Murray who took home the title. The faced Oliver Marach and Mate Pavic . They won with a commanding triple set of 6-7, 7-5, 10-5.

Just as with Pouille, this is the team’s second doubles title this season since they took home the Gold in Acapulco, Mexico in February. The team is ranked number 2 in the world currently and they share more than 30 titles between them, with this being Soares’s 25th title win and Murray’s 18th.

Marach and Pavic powerfully suppressed the team of Soares and Murray in the opening set before the team started an early lead in the second set and kept up a commanding call and response from the opposing team.

Rising To The Occasion

The unlikely duo will be heading to the Aegon championships for their next match where they are facing Sam Querrey and Giles Muller in the opening rounds.

Fan expectations are high for both the doubles partnership of these two as well as the future prospects of young Pouille as this seems to be his year.