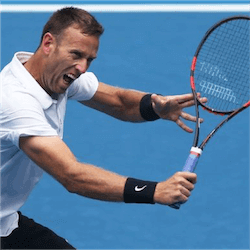 Venus and Harrison Through to Third Round of French Open

New Zealand tennis doubles player Michael Venus and partner Ryan Harrison have made it through to the third round of the French Open after defeating fourth seeds Brazil’s Marcelo Melo and Poland’s Lukasz Kubot. Describing it as the best win of their career, Venus and Harrison served out a nearly flawless doubles match in a time of just 1 hour and 50 minutes winning 6-4, 6-7 (7-5) 6-3.

The Kiwi and American pair never once faced a break point against their serve. In a statement, later on, Venus said that it was the key to winning the mach. He said they had a pretty good first serve percentage and were conscious of not giving away free points. It helped them find their rhythm and made the game that much more difficult on their opponents. Having never one a single set in previous French Open’s, Venus was understandably exited with their progress this year.

Venus and Harrison broke serve in the opening game and despite losing a second set tie breaker, took charge of the match from start to finish. Venus said that the match was a completely opposite to their first round match where the pair were broken first, causing them to tense up and play abnormally. The pair managed to close out the first set in a time of 33 minutes. The second set without a break and ended up in a tiebreaker.

In the tiebreaker, Venus double-faulted, giving Melo and Kubot the set. It was Venus’s first double-fault of the tournament which he joked about and got straight back into the match. The third set was looking to be a repeat of the second until the Venus and Harrison broke Melo’s serve in the 5th game. The took control from then on and closed out the match with relative ease. They will now face the Indian pair of Divij Sharan and Purav Raja for a spot in the quarterfinals.

Their Indian rivals managed to dispatch 15th seed Olivier Marach and Mate Pavic, Venus’s former partner. Speaking about their upcoming match, Venus said that the two are obviously playing well. Their latest win doesn’t have any bearing on what will happen in the next match, so they just have to prepare for a tough game. If Venus manages to win the next match, he would be on the cusp of making the top 30 in the world doubles rankings.