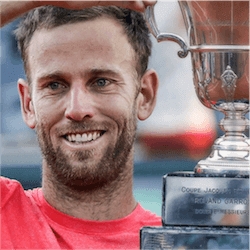 Michael Venus, the 29-year-old Aucklander and his American doubles partner Ryan Harrison have won the French Open in Paris. The pair were up against the dynamic duo of American Donald young and Mexican Santiago Gonzalez who were also unseeded in the tournament. It was the first time since 1993 that two unseeded teams have played in the French Open doubles final. Speaking about his victory, Venus said that he was extremely excited. He explained that he dreamed of playing in tournaments like the French Open and to come away with the trophy was truly unbelievable.

Venus and Harrison were firing on all cylinders in the first set. The pair got stuck in, creating four break points against their opponents but were just not able to convert. The tables were soon turned and Venus had to defend three break points himself later on in the set. Serving out the tiebreaker, Venus finally closed out the first set with almost an hour on the clock. Interestingly enough, it was the first time in the entire tournament that the pair actually won a first set in a match.

The second set was even closer with just one break point being made. Again, it came down to a tie breaker where Harrison and Venus were able to set up a mini break of 3-1. The two quickly lost their lead, conceding the next five points with Young and Gonzalez forcing a decider. The third set was a tough one for both teams with both teams holding their serve until the 6th game. Venus and Harrison finally got a break when Gonzalez double faulted at 30-40. Their break was short lived though as Venus was broken in the very next game.

The Kiwi/American pair got another lucky break, this time by Young who doubled faulted to give Harrison the chance to serve out the match. Holding his cool, Harrison racked up two match points and was able to serve out the match on his second match point. For Venus and Harrison the win was remarkable is no many ways. The pair only teamed up at the start of this year’s clay court season, having been friends for many years.

Having trained in New Zealand where there are very few clay courts, Venus had previously not won a single set at the French Open in his last three appearances. He now has the honour of being New Zealand’s first men’s Grand Slam Champion since 1974.