Muguruza Out of Australian Open 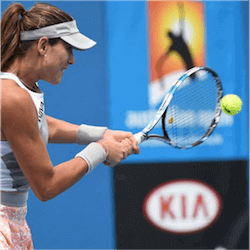 Spanish-Venezuelan Swiss resident Garbine Muguruza became the highest-ranked casualty of Round 2 in the Australian Open on Thursday. The 2016 French Open and 2017 Wimbledon champion, seeded third in Melbourne, was unceremoniously dumped from the women’s singles by Taiwan’s Hsieh Su-Wei in straight sets at the Rod Laver Arena.

It was a hard-fought match, with Muguruza doggedly battling her way to a tie-breaker in the first set, but she then lost it 7-1. Hsieh took the next set 6-4, and sent the Spaniard on her way. Previously, the highest women’s singles seed to fall had been Venus Williams at number 5, who succumbed to Belinda Bencic in Round 1.

Federer Through Round 1 Unscathed

At the time of writing, reigning Australian Open champion Roger Federer was yet to play his second-round match. However, given that the Swiss legend dispatched Slovenia’s Ajaz Bedine 6-3, 6-4, 6-3 in Round 1, it would be a huge upset if the tournament’s second seed couldn’t overcome Germany’s Jan-Lennard Struff in Round 2.

The biggest casualty in the men’s seeds by the end of play on Thursday had been eighth seed Jack Sock. The American was beaten 6-1, 7-6, 5-7, 6-3 by Japanese world number 41 Yuichi Sugita in Round 1.

There has been plenty of drama off the court as well. After a meeting of the Player’s Council last Friday, at which only players were allowed, rumours began swirling that council president Novak Djokovic was pushing for a player boycott of the Open, to signal players’ displeasure at the way revenues from the four Grand Slams are divided.

The Serbian 14th seed later denied these rumours, saying that although the division of Grand Slam revenues was one of several issues that had been discussed, the meeting was more a sharing of opinions to see where all the players stood, and that no boycott was ever proposed.

Djokovic’s version was confirmed by South African Kevin Anderson, the Players Council vice-president, who told reporters that the discussion about revenues was more about how to secure a better income for players ranked from 100 to 200, as the Top 100 players were doing fine financially, but there is a major drop-off in revenue among the next 100 ranked players.