Murray Out Of Aus Open Due To Injury 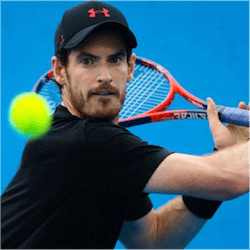 Another Star Down – Murray Pulls Out of the Australian Open

It is no secret that many of the biggest tennis stars have pulled out of the 2018 Australian Open while others are uncertain of starting in the first Grand Slam of the year. Now, Andy Murray joins the list of players to miss out on the global event. A five-time finalist at the Rod Laver Arena, Murray joins world number 4 Kei Nishikori in saying that he is not fit enough to compete. While fans may be disappointed in the lack of stars, Australian Open boss, Craig Tiley is confident there will be plenty of star power to go around.

While Nishikori is suffering from a wrist injury, Murray pulled out due to an on going hip problem that could require surgery in the near future. Taking to social media, Murray posted that he is sad to say that he will not be playing in Melbourne this year, as he is not ready to compete. As for Nishikori, he said that his rehab is going well, be he is not quite 100% and had to withdraw due to his wrist injury. To top it off, there are growing doubts over the fitness of Novak Djokovic from an elbow injury, Rafael Nadal’s knee and Stan Warwrinka’s knee injury.

Along with Murray, neither Warwrinka nor Nadal have played in a major competition since Wimbledon six months ago. Nadal also pulled out of the Brisbane International after cancelling Christmas training Majorca. Warwrinka and Djokovic both pulled out of an exhibition event in Dubai last week but are confident they will be ready for the Open.

A Chance for Djokovic to Claim his Seventh Title

Djokovic announced that he would be taking part in the Kooyong Classic exhibition, giving fans hope that his niggling elbow injury won’t come into play when he challenges for a record seventh men’s Open Title come January 15th. World number 8, Jack Sock could also become another Australian Open casually as he pulled out of his Hopman Cup match after hurting his hip from an on-court fall.

Meanwhile the Women’s Open could also be hit with a loss of tennis superstars as new mothers Victoria Azarenka and Serena Williams chose their next move. Serena performed well in her first match after the birth of her child but said she was unsure of whether she was ready for the Open. Former world number 1 Azarenka withdrew from the Auckland Classic as she continues to battle for custody of her son with her former partner. With many of the “big guns” possibly out of contention, it could be a great year for the lower seeds to show their worth.