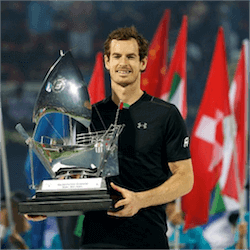 The women’s tournament of the 2017 Dubai Duty Free Tennis Championships ended on Saturday, 25 February. Tournament seventh seed Elina Svitolina won the women’s singles title, beating Caroline Wozniacki in the final, which saw her WTA ranking rise to a career high at No. 10.

Last week, New Zealand betting fans would have been punting on the men’s singles, which Andy Murray won for the first time. It was also the Number 1 seed’s first win of the year. After a wonky start in the final, Murray came back to beat Fernando Vasco 6-3, 6-2.

Vasco knocked out fellow Spaniard and tournament sixth seed Roberto Bautista Agut in the Round of 16, but Agut wasn’t the only one of the top six seeds to go early. Second seed Stan Wawrinka, the Swiss defending men’s singles champion, fell to Bosnian Damir Dzumhur in the Round of 32, and the Czech Tomas Berdych, seeded fifth, lost to Dutchman Robin Haase in the next round.

Swiss third seed Roger Federer, coming off his Australian Open win, was also dispatched in the Round of 16, in a surprise result from Russian Evgeny Donskoy. The French fourth seed, Gael Monfils, made it to the quarterfinals, where he was defeated by Verdasco.

Murray was the only player in the Top 6 to make the semis, where he beat French seventh seed Lucas Pouille. It took Verdasco three sets to beat Haase in their semi, which he eventually won 7-6, 5-7, 6-1.

Trading Breaks at Start of Final

Murray’s final got off to a rocky start, with Verdasco breaking his serve in two games running, thanks to unforced errors from the Scot. In between, however, Murray returned the favour, so the Spaniard was only 3-1 up after four games. From then on, though, Murray was on the comeback trail, winning five games in a row to take the set.

Now in full flight, Murray was unstoppable, and Verdasco managed to hold his serve only twice in the second set. Murray wrapped it up clinically, winning 6-3, 6-2. He remains top of the ATP World rankings, while Verdasco’s progress to the final has boosted him two places, to World No. 35.