Nadal No1 for US Open 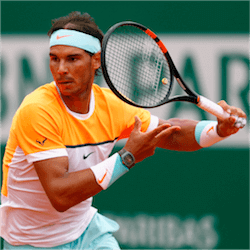 Nadal Back At No1 Ahead Of US Open

With 9 years having passed since he first reached the no1 position on the ATP rankings, Rafael Nadal makes his return this week, which marks the fourth time that the tennis star makes his way back to the coveted no1 spot. This news follows after Britain’s Andy Murray lost the spot after 41 weeks.

The US Open will be the place where Nadal will show if his newly achieved ranking is well deserved. At the moment the top tier players are in quite a state. Murray is still trying to recover his top form after recurring injury cost him the Wimbledon title while Roger Federer also seems to be struggling with his form after he suffered a surprise loss against Alexander Zverev.

Two other top seeds in the Men’s tournament also won’t be making an appearance which could potentially lead to some notable upsets at the US Open this year with more lower tier players being given a chance to shine.

Former world no1 Maria Sharapova has had fans in a frenzy ever since it was announced that she will be making her welcome return, after 18 months away from the sport, at the US Open.

The famed player received a wild card draw for the event that marks her first professional event after a doping ban cost her months of playtime.

Sharapova has sustained an arm injury a few weeks ago that resulted in her cancelling her Rogers Cup performance but she should be ready to kick off the US Open in a few days.

It does seem Stan Wawrinka will not be making it to the US Open this year. The last time fans saw Wawrinka, he made a surprise exit from Wimbledon in the first round when he was defeated by Daniil Medvedev.

The knee problem that caused the lacklustre performance is still persisting and Wawrinka is now battling to get fit ahead of the US Open. He has already cancelled events at the Rogers Cup and the Western and Southern Open.

The defending US Open champ will be missed at the event this year but he has wisely decided to follow doctor and management’s orders and recover fully before entering any new events.

No Challenge From Djokovic

After he was diagnosed with a bruised bone in his elbow, Novak Djokovic is set to miss the US Open as well this year. The challenge he offered the field will definitely be missed but doctors have advised the ace to rest for between 6 and 12 weeks.

Djokovic’s last public performance was at Wimbledon where he was eventually unable to continue against Tomas Berdych due to his injury. Djokovic has received specialist attention from doctors in Toronto in America and so far his recovery is going well.