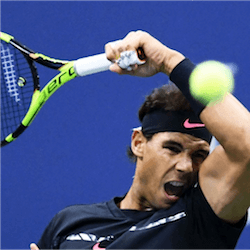 A second-round win at the Paris Masters has ensured that Rafael Nadal ends 2017 at world number one. Having started at 9th in the world at the beginning of the year, Nadal quickly rose in rankings with wins at the French Open and US Open respectively. Going up against Hyeon Chung in the second round of the Paris Masters, Nadal advanced through to the round of 16 with a 7-5 and 6-3 win that lasted one hour and 48 minutes.

The 31-year-old will now go on to face world number 36, Pablo Cuevas in the next round (the final 16). Chung proved to be more of a test than Nadal was hoping for. The first set saw each of the two players breaking their opponent twice in a complete seesaw set. Nadal finally got the better of the South Korean, breaking in the final game to clinch the first set. Conceding the only break in the set, Chung handed Nadal the win an unassailable point lead over world number two, Roger Federer.

1460 points clear of the Swiss champion, Nadal has ensured himself the number one spot ahead of the World Tour Finals in London. Nadal now officially becomes the oldest player to end the year as world number one since the modern ranking system was introduced in 1973. This is an unbelievable effort considering that it was just over 12 months ago that Nadal announced a premature end to his tennis season due to a lingering wrist injury.

A Fifth Federer Matchup Could Be on the Cards

His second-round win at the Paris Masters makes it 66 wins this season alone. In 2017, he has won six titles and played in three out of the four Grand Slam finals. His comeback to tennis has been marked with significant improvement in his trademark forehand as well as his second serve and backhand. His only frustration in 2017 has been in the form of Roger Federer. The swiss champ has won all four of their matchups this year and is a puzzle Nadal just cannot seem to figure out.

There is a possibility that the two will face a fifth matchup at the World Tour Finals later this month. While the indoor hard courts tend to favour the Swiss, there is an added incentive to win for Nadal as this is one of the titles that has eluded him over thus far.