Nadal’s Attempt At An 11th Win At French Open 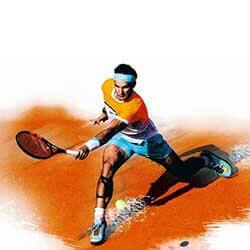 Rafael Nadal has given a new nickname: the King of Clay due to his unstoppable performances on the court, and has announced his bid for an 11th win at Roland Garros. Nadal is the highest ranked tennis professional in the world at the moment, and a favourite to take home the French Open trophy.

The player is currently 79-2 in Paris, and is once again a favourite for the title. So far, Nadal has only lost one match this season, and has seen wins in Monte Carlo, Rome, and Barcelona, where he took the winning title for each event.

His next opponent will be Simone Bolelli of Italy, and the two will duke it out on Court Philippe Chatrier.

Dominic Thiem, a seventh seeded contender to Nadal’s crown, is the only player so far to best Nadal in the courts this season. He is currently set to play against Ilya Ivashka of Betarus on Court 1, proving that he is just as busy as Nadal, and it’s possible the two will clash again some time in the future as they continue to climb the ranks almost without opposition.

Novak Djovok, former champion and seed number 20, will see a match against Rogerio Dutra of Brazil in the coming weeks.

On the other end of the spectrum in the women’s games, number 2 seed Caroline Wozniacki will be taking on Danielle Collins from America. Maria Sharapova, two-time champion, is set to play against Netherlands’s Richel Hogankamp.