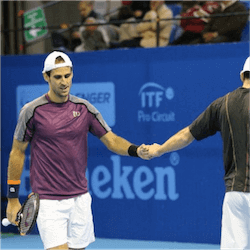 Tennis world No. 1 Novak Djokovic hasn’t exactly had the best of runs following his convincing defeat of rival and world No. 4 Daniil Medvedev during February’s Australian Open final. Djokovic during this past weekend’s Serbian Open semi-final crashed out of his own tournament at home after suffering a surprise defeat against Russian and world No. 28 Aslan Karatsev.

Karatsev saved an incredible 23 out of a total of 28 break points in a stellar run that saw Djokovic left lagging seriously behind at 7-5, 4-6, 6-4, with the Russian thereby avenging his AO semi-final defeat in the most powerful of ways. The Serbian Open is played at Djokovic’s own tennis centre in Belgrade.

No doubt making matters worse for the Serbian and world No. 1 is that the weekend’s shock defeat had been his second loss in quick succession on the red clay. His latest massive defeat came after he was previously beaten by Dan Evans during the third round of this year’s Monte Carlo Masters only last week.

Djokovic said following the loss to Karatsev at Belgrade that it’s never a good experience losing to anyone while playing at home. He said its in fact a disappointing and painful experience, adding that he didn’t feel too great about anything. He did however congratulate his Russian opponent, saying Karatsev had played “bravely”. He closed off by saying that the Russian had timed all his best shots in perfect fashion, and that he’d put up an awesome performance.