NZ Face Off Against Korea In Davis Cup 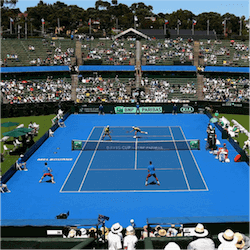 The New Zealand Davis Cup tennis team were all geared up for their group 1 tie against the Korea. While they may have been feeling confident about their Asia/Oceania matchup, New Zealand Captain Alistair Hunt said he was not taking any chances. The visiting Korean team was resting two of its key players as they prepare for ATP tournaments. This will work in New Zealand’s favour for the duration of the tournament, as Hyeon Chung will be out of the running and so will Duckhee Lee.

Filling in for the Korean team is 19-year-old Soon Woo Kwon. Ranked number 253 in the world, Kwon earned a spot in the final of the Yokohama Challenger last month as a qualifier. Joining Kwon will mostly likely be Seong Chan Hong. Also 19 years of age, Hong is currently ranked at 554 in the world and pulled of an impressive win over Rubin Stratham at last year’s Davis Cup in Seoul. The other members of the Korean team include Jea Moon Lee ranked 790 as well as Hong Chung ranked 607 in the world.

While their rankings might seem on the high side, the New Zealand captain will be wary of the Korean Team. The captain has been around long enough to know that rankings don’t always mean that much in the Davis Cup. Speaking to the press about the Korean’s decision to rest two of their biggest players, Hunt said that it would give the New Zealand team a much better chance. He went on to say that it would still be a tough weekend for the team.

According to Hunt, the team have been training well and are pulling together nicely. Playing at home is key for the Kiwi teams, as they will have huge support from the crowd. Hunt is just hoping for the home crowd to get behind them from the start. New Zealand’s lead player, Rubin Stratham will be eager to make amends for team after having lost against the Korean’s last year. Stratham said that he knows all of the Korean players and have played them each before. It’s not going to be easy he said but he is keen to get his revenge.

Michal Venus and Rubin Stratham are the key players in the single division while Marcus Daniel and Artem Sitak will make up the doubles team. Since 2013, the New Zealand team have not lost a doubles match in the Davis Cup, which bodes well for the team.