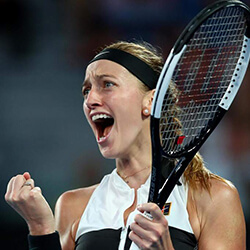 Petra Kvitova has reached her very first Grand Slam final since her stabbing, and has beaten unseeded American Danielle Collins while playing in extreme weather at the 2019 Australian Open. Czech Kvitova, who is eighth seeded, dominated the match, and cleared a tiebreak to win a tight first set under a closed roof, with a score of 4-4.

The 28 year old, who is a two-time Wimbledon champion, controlled much of the second round as 25 year old Collins grew increasingly frustrated. Kvitova won the match 7-6 (7-2) 6-0 and is set to take on either Naomi Osaka or Karolina Pliskova for the final.

If Pliskova manages to win against her US Open winner opponent will mean that the final could be set up for all Czech players for the first time in a women’s singles Grand Slam.

A forehand winner claimed her victory on Kvitova’s first match point after she reached her first final at the Australian Open. Talking about the game, Kvitova said that she finally made it deep into a major, and that whatever happens in the upcoming final, she is happy that she made it this far.

If Kvitova does win the final, she will beat Osaka or Pliskova in the race to replace Romania’s Simona Halep as the next world number one. Kvitova hadn’t reached a semi-final round in a Grand Slim since being assaulted at her home in 2016, and has since worked hard to reach her current position.