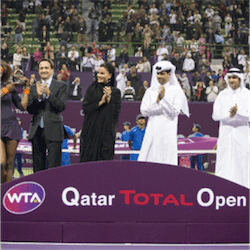 The annual Qatar Total Open is kicking off on the 13th of February with the event set to run through until the 19th of February.

The competition is certainly hotting up after Carla Suarez Navarro’s from behind victory to win the 2016 Open.

The increase in prize money and top tennis names that are set to take part in this year’s tournament makes it one to watch.

Last year’s prize money topped $2,818,000 and this year should be no exception with one of the most rewarding woman’s tournaments on the planet. This hard court tournament pushes players to their absolute limit on the court and it is always exciting watching.

So far no official fixtures have been released, but fans expect more top performances from the stars of last year’s event.

Currently ranked number two in the world, German Angelique Kerber made her first appearance in the Qatar Open last year as a champion of the grand slam.

She was defeated by Chinese player, Zheng Saisai. Saisai was ranked number 73 while Kerber had a sweeping victory over tennis ace Serena Williams.

Simona Halep, Romanian second seed and ranked number 3 in the world, has had a poor showing since the 2016 Open. She has lost 11 of her 12 matches.

Halep has previously postponed nasal surgery in order to compete in more tournaments but it seems this has affected her negatively so far. Fans are hoping that her form improves when she defends her Indian Wells title.

The star of the show of course is Carla Suarez Navarro who went on to win the Open and claim her second WTA title in her professional career.

Navarro had a shaky start to her final, but once she managed to minimize her errors in the second set, she won a much-needed victory for herself and her home country of Spain.

A Tournament to Watch

The Qatar Total Open was founded in 2001 and started as a tier 3 tournament until the prize money was eventually upped to the current  $2 500 000.

Since the founding, the tournament has only not been hosted twice in 2009 and 2010 since the venue, the Khalifa International Tennis and Squash Complex, was used to host WTA Tour Championship.

The Qatar Open hosts both single and doubles events. The current doubles champions are the Chinese pair Chan Hao-ching and Chan Yung-jan.