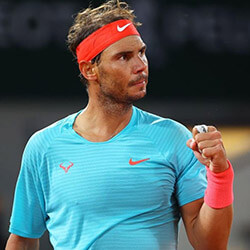 Well-loved tennis star Rafael Nadal has powered his way into a 13th semi-final to be played at Roland Garros as part of the French Open. This after the tennis super star successfully warded off an onslaught from 19-year-old Italian player Jannik Sinner in Wednesday’s quarter-final.

Nadal didn’t seem too bothered with the fact that the match only finished far past midnight due to the weather conditions currently at play at the famous tennis court. The precarious current conditions are being created by the use of artificial lights allowing matches to be played well into the night. This year is the first year artificial lights are being used at the Grand Slam clay-court tournament.

The star did however add that the cold conditions are in no way ideal and actually pose several risks to the human body.

The quarter-final played between Nadal and Sinner only got underway at around 10:30 p.m. on Tuesday evening. The game was the last match scheduled for a day packed with matches to be played. The full schedule had been the result of the addition of a contest carried over from the previous day. The carried-over event could not continue as originally planned because of heavy rain.

World Number 2 top seed Nadal has yet to lose a set in the French Open tournament. If Nadal does prove successful at reaching his goal of winning a 13th French Open and 20th Grand Slam title, he will have equalled Roger Federer’s current record for men’s tennis.