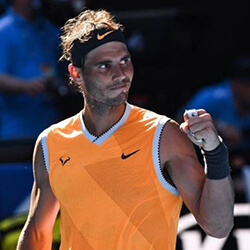 Second seeded Rafael Nadal has ended young Greek Stefanos Tsitsipas’ winning streak and ensured a place for himself in the fifth final of the Australian Open.

21 year old Nadal was on top form as he beat the 14th seeded 20 year old 6-2 6-4 6-0 in one hour and 46 minutes. The Spanish player claimed 28 winners, and break his opponent’s serve six times, facing only one break point himself. He is now set to face either top seeded Novak Djokovic or France’s Lucas Pouille at the tournament’s final game.

Nadal, talking to reporters after the game, said that it was a great match, and that it has overall been a great tournament and he has played well every day, adding that hopefully he can play even better in coming games. Nadal, who endured a number of injuries last year, is playing his first tournament after he lost in last year’s US Open semi-final matches. It also marks his first competition after pulling out of the Brisbane Intentional.

Nadal, who won at Melbourne Park in 2009, is just one victory away from earning all four Grand Slams at least twice, something that no other male player has been able to achieve in an Open era. Serbian Djokovic is also hoping to earn his own place in history as he looks to claim a record seventh men’s singles title, although he will first need to beat Pouille, who is making his debut at his first Grand Slam semi-final.