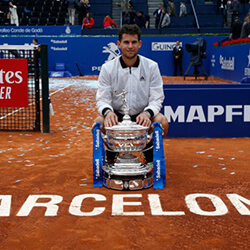 11-time winner Rafael Nadal was left stunned after his loss to Dominic Thiem during the semi finals of the Barcelona Open. Thiem managed to save three breaks points in their final game that saw him ultimately win with 6-4 6-4 upset over the 11 time champion Nadal, and has advanced to the final of the Barcelona Open.

The Austrian player, who lost the Roland Garros final game to the Spaniard last year, dominated the game, denying Nadal the chance to become the first player to claim the same ATP title 12 times in his career. Talking about his loss, Nadal insisted that he is happy with how he played, and that he was competitive for the firs time in a few matches.

Thiem is now set to take on Daniil Medvedev, who recently bested two time tournament victor Kel Nishikpro 6-4 3-5 7-5. Adding to his statement, Nadal said that things were positive even if he had lost, and that he believes that Thiem is a great guy and a great player, stating that he played on a good level, and that it was an improvement from the previous series of matches where he was not playing competitively.

Thiem, who is third seeded, took revenge for his 2019 French Open final loss to Nadal, but also for his 2017 Barcelona title match that he lost to the 32-year-old Spanish player. It also marks the first time that Nadal has lost a Barcelona semi final game.