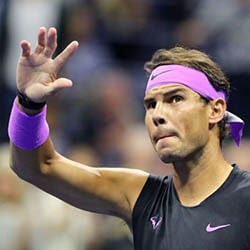 Rafael Nadal won his 19th Grand Slam title after holding off the exciting fightback of Russian Daniil Medvedev in one of the biggest US Open rounds to date. Nadal from Spain, 33, scored 7-5 6-3 5-7 4-6 6-4 against New York’s fifth seed. The player, seeded second, was on a two-set cruise and a break-up just for Medvedev to force a decider.

But in four hours and 50 minutes, Nadal halted his momentum to clinch a unique victory-only four minutes longer than the shortest US Open finals. Nadal fell to the court floor in tears after getting his third match point, hiding his face as he considered another popular win that epitomized his spirit of winning. Medvedev, 23, moved around the net to congratulate his adversary, who was at the verge of tears as he hid behind his sweat-soaked vest while rejoicing. Those fortunate enough to watch among a crowd of nearly 24,000 fans were frequently left open-mouthed at what they witnessed, with the rest jumping to their feet and wildly celebrating after each stage, helping to build a powerful atmosphere at Arthur Ashe Stadium.

Earlier in the tournament, the audience booed Medvedev, yet many heard his name loudly chanted as he made an exceptional return. After the Spaniard lifted the trophy in New York for the fourth time, Nadal, Federer and Djokovic won the past 12 Grand Slams. Now Nadal has the opportunity to draw level at the Australian Open in January with 38-year-old Federer, who was nine points higher off than his long-time competitor in 2007.