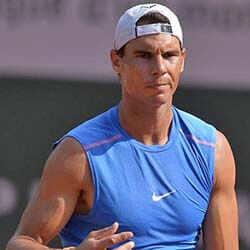 Rafael Nadal, the highest ranked player in the world right now, has yet again earned another win in the straight sets at Roland Garros, reaching the third round of the Grand Slam. Nadal has seen one of his best seasons so far, adding to his victories at the French Open, where he hasn’t lost a game since 2015.

His winnings makes him the favourite once again in Paris, and his latest game against Guido Pella of Argentina on Court Suzanne Lenglen saw victory for Nadal with 6-2, 6-2, and 6-1.

Despite his recent success, Nadal maintains that there is always room for more improvement. He told reporters that he is always trying to improve the more important aspects of his game. He believes that in his latest game, his opening backhand was not sufficient, and that he would practise until it was.

His last loss at the French Open was in 2015, in a quarterfinal against Novak Djokovic. A year later, Nadal was forced to withdraw from the French Open due to an injury that he sustained on his wrist after a series of winning games. Once he returned, he led an unstoppable campaign as he worked up to the winning trophy.

Nadal’s match against Pella saw him hit 378 winners in total, and save all four break points. His next game will see him up against Richard Gasquet of France. Although Nadal and Gasquet are friends, it will no doubt be a difficult match for both.