Results from the Ricoh Open 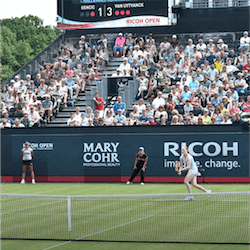 The Ricoh Open Tennis finals concluded this weekend serving up some talented winners. First off the men’s singles final ended with Gilles Muller besting Ivo Karlovic. These two veterans had the crowd on their feet and they have been a testament to the longevity many players have in the game.

Muller is 34 and Karlovic is 38 yet they put on a powerful performance with cannon like serves. The match was a mirror image of their last meeting at Ricoh where Muller also defeated Karlovic during the semi-finals.

Expectations were mixed for the finals since even though Karlovic is a strong competitor, he has not been very consistent this season with losing streaks and no back to back wins so far.

Muller on the other hand has had probably the best season of his career coming into the finals. In fact Muller began the season with his first ever ATP title win in Sydney. Muller took the match with a 7-6, 7-6 clinching it with 4 successive points for a dominating victory.

On the Women’s singles side of the Ricoh Open, Annette Kontaveit took the title from Natalia Vikhlyantseva 6-2, 6-3.  Kontaveit entered the Open unseeded and has risen though the ranks to surprise many with her title win.

The talented young player beat out no 8 seed Kristyna Pliskova and 7th seed Lesia Tsurenko during her climb further adding legitimacy to her sterling performance.

She seems to prefer grass over clay as she won main draw rounds at the Indian Wells and Miami Sunshine Doubles this year. She also made her way to the finals of the Biel Bienne Ladies Open.

Her other season highlights this year included quarter final finishes in Stuttgart and Rome where she made a name for herself beating the world no 1 Angelique Kerber. Kontaveit now sits at 36th in the ATP rankings, quite a jump for a virtual unknown player.

On the doubles side of things Lukasz Kubot and Marcelo Melo took the gold home after defeating Raven Klaasen and Rajeev Ram.

This was a rematch after the same doubles pairs faced each other at the Indian Wells finals which Klaasen and Ram won. They did not show the same fire from that though, taking a decisive 6-3, 6-4 beating.

The women’s singles ended with Kiki Bertens and Demi Schuurs being defeated by Kirsten Flipkens and Dominika Cibulkova 4-6, 6-4, 10-6.