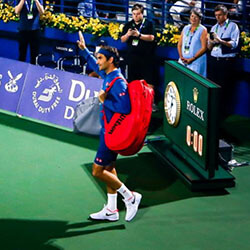 Roger Federer has claimed his 50th victory at the Dubai Tennis Championship after beating Spanish Fernando Verdasco in three sets, and has since advanced to the quarterfinals of the event. Federer is closer than ever to his 100th ATP Singles title after his latest 6-3 3-6 6-3 win.

Talking about his win, Federer said that even though he wasn’t playing his best, he felt like it was going to fall his way when it mattered the most, adding that he believes confidence is important.

The 37 year old, 20 time Grand Slim title victor is now set to take on Hungarian Marton Fucsovics – world number 25 – in order to take a place in the last four. A shock defeat for top seeded Kei Nishikori against Polish qualifier Hubert Hurkacz left the audience in shock. Hurkacz managed to convert six out of seven break points and went on to beat his Japanese opponent 7-5 5-7 6-2.

If Federer manages to win a record eighth title in Dubai, who will also be earning a century of ATP wins, with only American Jimmy Connors in front of him with a total of 109. Fucsovic set up a quarterfinal match against the second seeded Federer with a 6-4 6-2 victory over German Jan-Lennard Struff.