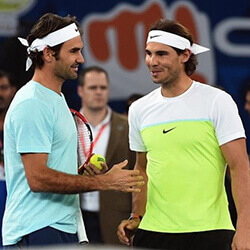 Roger Federer, who is currently ranked as the world’s number one tennis player, has told reporters that he believes his long-time rival, Rafael Nadal, is looking “very good” ahead of their clash at Wimbledon that will be taking place in July.

Both players have claimed all of the six Grand Slams in the last six years, but have not gone head-to-head in the same Major since the 2017 US Open.

Nadal and Federer has long been swapping places between the world’s number one and number two over the last few years, but Federer managed to take the top position after his Stuttgart Open victories in recent weeks.

In order for Federer to maintain his current position, he will need to win at Halle, which will keep him above Nadal until they head into the courts at Wimbledon.

Federer has stated he believes that Nadal is one of the big favourites to win at Wimbledon, and that the key for Nadal is to do the early matches. He went on to add that there are a lot of players that are taking part, and that anything can happen in the meantime.

Nadal has won at Wimbledon twice in his career, and has since gone on to claim nine more major tournament victories since. Others, like Novak Djokovic and Andy Murray have struggled to hold their positions in the face of Nadal and Federer, which has given the latter two the chance to move forward almost unopposed.