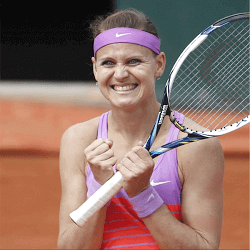 Lucie Safarova, currently ranked Number 62 by the WTA, but who was Number 5 in the world as recently as September 2015, had no trouble winning her opening match of the ASB Classic at the ASB Tennis Centre. The left-hander sailed easily to victory over fellow Czech Denisa Allertova in the first round on Monday, finishing 6-1 6-2.

Allertova, currently ranked 91st, didn’t do her own cause any good by delivering nine double faults, including a last one at match point to seal her fate. But serving up seven aces, it was clear that Safarova was simply too strong for her opponent. She broke Allertova’s serve three times in succession in the first set, and took four straight games to finish the second.

Another Czech on Czech Match-Up

Through to the second round of the 2017 ASB Classic, as the Auckland Open is known under ASB sponsorship, Safarova’s next opponent will be yet another Czech, although we have yet to find out which one. World No. 19 Barbora Strycova, seeded fourth in the Auckland tournament, is due to meet Barbora Stefkova in their first-round clash on Tuesday; both women hail from Czechoslovakia as well. With Stefkova only ranked at No. 198, Strycova is the favourite to meet Safarova in the next round.

That is, of course, assuming we can count on a full day’s play out of the Auckland weather on Day 2. Day 1 was rained out after only five matches were completed, so fans waiting to see legend Serena Williams in action had their entertainment postponed.

Only two matches in the ASB Classic main draw were among those that got to a result before the rain came down. Safarova’s was one, and the other saw Japan’s Kurumi Nara take down German wildcard Antonia Lottner just as emphatically: 6-2 6-2. Fifth seed Kiki Bertens from the Netherlands has yet to play American Lauren Davis in their first-round match, but the winner will meet Nara in the second round.