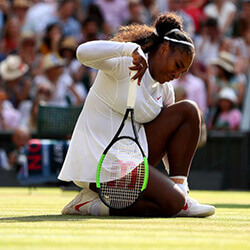 Williams had a long fight to reach the final after an absence of 10 months to give birth to her first daughter, but despite her effort, the American player lost during the final game of the international event. The upset saw Williams lose to Kerber in two sets of 6-3 and 6-3, which many have claimed is one of Williams’ most lopsided losses.

The start of the match saw Williams’ coming out strong, but it didn’t take long for the audience to realise that she was outmatched by Kerber. Kerber made only 4 unforced errors during the game, while Williams’ made a total of 14. The German player is currently ranked at number 11th worldwide, and has two two major titles in the past. One at the 2016 Australian Open, and the other at the 2016 U.S. Open.

Williams, who is ranked at 25th internationally, went on to tell reporters after the game that she dedicated her efforts to all the mothers out there, and that she tried her best. She went on to say that she was happy to have made it so far in the competition, and while her loss at the final was a disappointed, she said that she’s only getting started.