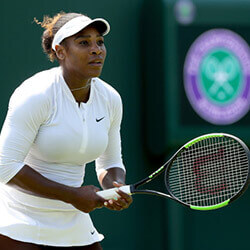 World-famous tennis player Serena Williams has told reporters that she fans to find out why she has been subject to more drug tests than her current opponents. Her queries into the drug testing will come at a later date, however, as the player wants to focus all her attention on Wimbledon at the moment.

Williams has seen some victory since her year-long absence due to giving birth to her first child. She won her first round against Arantxa Rus of The Netherlands in a match that was hit with extremely windy conditions. Despite the weather, Williams saw a victory through straight sets of 7-5 and 6-3 on the opening day of the international event. Before her absence, Williams had won at Wimbledon both in 2015 and 2016.

Her concerns about the drug testing came after it was learnt that statistics released from the US Anti-Doping organisation showed that she had been tested four times more than other American female athletes. Williams stated that she was surprised to learn that she had been tested more than her competitors, especially considering she was undergoing fives times more tests in some cases.

She added that if she wasn’t currently playing Wimbledon, she would be pursuing answers as to why she has been tested so often. The opening match at Wimbledon was William’s first grass court game in over a year after her leave of absence, which she used to give birth and look after her baby, Olympia.