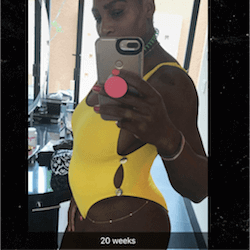 Serena Williams is Pregnant with Her First Child

Serena Williams recently revealed that she is 20 weeks on with her first pregnancy. She did so by posting a close-up picture of her swelling belly with her fans on Snapchat, citing a frenzy as fans tried to work out whether the post was a joke or not.

The world no. 2 ranked tennis player has been off the courts since her most recent triumph, at the Australian Open this January, where she beat her sister, Venus, with a score of 6 – 4 in order to secure her 23rd Grand Slam title. Last month Serena pulled out of the Miami Open and Indian Wells tournaments, although she claimed the reason for this move was because of a knee injury.

No More Williams Until 2018

Ms Williams will not return to tennis again this year, but hopes to hit the courts again in 2018 according to her spokeswoman Kelly Bush Novak, who went on to say that Serena is excited about doing so.

Williams will return to the world no. 1 ranking next week, and stoked furious debate amongst those who had seen the picture after she deleted it and refused to comment publicly for more than 6 hours.

Her Pregnancy is Confirmed by Novak

Novak has confirmed that the star is expecting, and the happy news follows that of her engagement to Reddit co-founder Alexis Ohanian, which was announced in December last year.

Her 36th birthday, in September this year, will allow Serena to look back over a truly illustrious career, in which she managed to hit each and every milestone a woman of her talent was able to. She has won Wimbledon, the Australian Open, and stayed in the world no. 1 ranking for 316 weeks in total.

Fans were very quick to work out that Serena was expecting during her Grand Slam triumph in Melbourne this year, and also teased that she seemed to time the announcement with Maria Sharapova’s 30th birthday. The Russian athlete is set to return from her recent drugs ban at a match in Stuttgart next week.

Williams Goes Back to the Top

Serena lost the no. 1 ranking to Angelique Kerber earlier on in 2017, but will return when the latest standings become available on Monday. Her announcement also arrives one week after Victoria Azarenka, former no. 1 and recent first-time mother, revealed her intentions to return to the tour in July of this year.

Serena Joins a Host of Top Female Athletes with Kids

Azarenka stepped away from tennis in 2016 when she fell pregnant with her son, Leo, who made his arrival in December last year. Kim Clijsters also famously returned from motherhood to take first place for the 2nd time in 2009’s US Open, but the Belgian is not the first to do so.

Paula Radcliffe’s triumph in the 2007 New York marathon happened just 10 months after she gave birth to her first child, and Catherine Ndereba, from Kenya, broke world records for both the 5 and 15 km in 1998, one short year after giving birth.