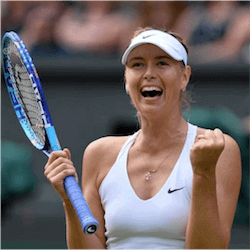 New Zealand tennis fans will be weighing up potential winners for the next Grand Slam, even though the French Open doesn’t start until 22 May. A major question for many punters is whether Maria Sharapova will be allowed to play in the women’s singles.

The Russian is completing a 15-month doping suspension, and will only return to international competition on 26 April. She therefore won’t be able to qualify on points for the Paris Grand Slam, and will need a wild card entry.

However, after Roland Garros spent several million Euros on an anti-doping initiative, many feel it conflicts with the tournament’s integrity to grant a wild card to Sharapova immediately after her return from suspension, despite her superstar status. At the time of writing, she was set to meet French Tennis Federation chief Bernard Guidicelli to plead her case.

With or without Sharapova, New Zealand betting enthusiasts can expect a strong field in the women’s singles. Defending 2016 champion Garbine Muguruza will most likely be seeded second, and betting sites are offering odds of 9-2 on her retaining the title.

However, last year’s runner-up and this year’s Australian Open champion, World No. 1 Serena Williams, is a shoe-in for top seed, at odds of 2-1. Simona Halep and Angelique Kerber may also be worth a punt.

Serb Novak Djokovic, the ATP World No. 2, is the likely top seed in the men’s singles; currently at 13-8. His quarterfinal loss in Acapulco’s Mexico Open in March, to Australian Nick Kyrgios, may give punters pause. Kyrgios will also be challenging in Paris.

However, Australian veteran Pat Rafter is one of thousands backing Rafael Nadal to take his tenth French Open title. In January’s spectacular Australian Open final against Roger Federer, even finishing as runner-up, the Spaniard made it clear that he’s back at full strength after his long injury hiatus. He finished runner-up again in Acapulco, losing to the USA’s Sam Querrey in the final.

Bookies are offering 11-4 on Rafa at Roland Garros, and it’s hardly surprising. His tally of nine championships, not just the tournament record but also the most wins of any individual Grand Slam tournament, combined with his acknowledged mastery on clay, should make him hard to beat in May.