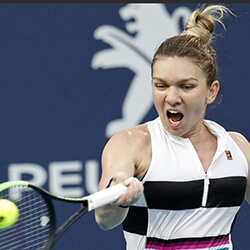 Simona Halep took her fourth successive victory over Venus Williams and has advanced to the quarterfinal games of the Miami Open. The Romanian third seeded hit a total of 21 winners as she bested Williams 6-4 6-3 and will now be facing Chinese Qiang Wang, who recently defeated compatriot Yafan Yang 7-5 6-4.

Both Kvitova and Halep stand the chance of replacing Naomi Osaka as world number one by the time the tournament comes to an end. Czech Kvitova bested French Caroline Farcia 6-3 6-3 and reached her fifth WTA quarterfinal for the year. The second seeded is set to take on Ashleigh Barty after the Australian beat Kiki Bertens 4-6 6-3 6-2.

If both players manage to make it tot he final, the winner will claim the world number one ranking. Romanian Halep was crowned world number one for a total of 48 weeks before she was replaced by Osaka earlier this year in January, while two time Wimbledon champion Kvitova has yet to hold the top ranking. Canadian teenager Bianca Andreescu’s unbeaten 10-match run was ended after she was forced to retire from an injury. The 10 year old was trailing Estonian Anett Kontaveit 6-1 2-0 when she withdrew because of a problem with her right shoulder.

Hsieh Su-wei, who recently bested top seeded Osaka, has continued her form with a three set win against Caroline Wozniacki. The Taiwanese player beat the former world number one 6-3 6-7 6-2.