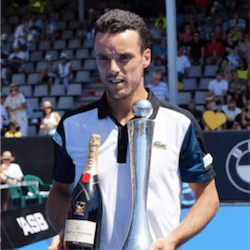 Jack Sock knows the agony of having to leave a tennis tournament through illness. Last year, flu forced the rising US star to retire in the second set of the 2016 ASB Classic Final, handing the title to Spain’s Roberto Bautista Agut. Ironically, at the 2017 ASB Classic, the defending champion withdrew from the competition in the early rounds with a gastric bug, so he proved no threat to Sock’s quest to make it second-time-lucky.

Which he duly did: the lanky corn-fed 24-year-old from the American Midwest triumphed over Portugal’s Joao Sousa in the ASB Classic Final on Saturday, even though it took him three sets to do so, finishing 6-3 5-7 6-3. In what some are already calling the greatest final in the tournament’s history, and certainly in the past decade, the pair battled for almost two hours in front of a riveted crowd at Auckland’s ASB Tennis Centre.

Millions more watched the final on TV around the world, and of course, plenty of New Zealand’s sports betting fans were following the action online, via live streaming at betting sites. When Sock took the first set 6-3 in just 34 minutes, those with a punt on him must have been feeling quite secure: it was the first set Sousa had lost in the tournament, so it appeared he had met his match.

However, Sousa wasn’t prepared simply to roll over. The 27-year-old from the medieval city of Guimaraes has being playing tennis since the age of seven, and he brought all 20 years of experience to bear in the second set. He took out semi-finalist and eighth seed Marcos Baghdatis with a ruthless 6-1 7-5 on Friday, so fans backing Sock had every reason to worry when the Portuguese came back from near-championship point in the second set to win it 7-5.

In the final set, the American’s heavy service returns began combining with Sousa’s first signs of heat fatigue to grind him down, and his double fault at game point, with the score at 4-3, handed Sock a 5-3 advantage. The world Number 23 made good use of it, holding his serve in the following game to clinch the championship.