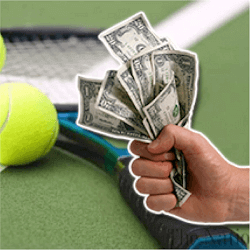 Local Spanish authorities have detained 34 people involved in a tennis match-fixing network. The 34 detainees include 6 tennis players, and it is estimated that the network made more than half a million dollars in a relatively short period of time.

The match fixing took place in lower tier tournaments played across Spain and Portugal and was uncovered after police probed several Challenger and Futures tournaments in Iberia, over a period of a few months. During the probe police discovered evidence that the results were being rigged and acted accordingly.

As yet, the 6 tennis players have not been named but authorities have revealed that they ranked between 30th and 300th in Spain, and 800th and 1200th globally.

Police have said that they found evidence of match fixing in five cities, including in Seville, Porto and Madrid, in 17 different tournaments.

Ring Leaders Amongst Those Detained

Spanish authorities have said that amongst those detained are the ringleaders of the operation and it seems that they have cracked the match fixing syndicate at its core. The leaders of the network were based in La Coruna and Seville and if convicted of corruption in sports they may well face prison sentences of as long as four years.

All those detained are expected to be released until trial, which may take up to a year to come before the courts.

Authorities who were working on the case noticed an inordinate number of online bets placed when certain games were played, and following the tipster’s advice they were able to close in on the network. It’s said that the match-fixing ring used instant messaging services and social media platforms to attract punters who would then pay for information about rigged matches.

The players who participated in the scam each received $1000 for throwing a match and it seems that in some cases they were asked to aim for specific score or total in order to meet the betting requirements. In some tournaments it’s estimated that the networks’ earnings exceeded $10,000, which is big bucks for smaller tennis tournaments that usually don’t attract much attention.