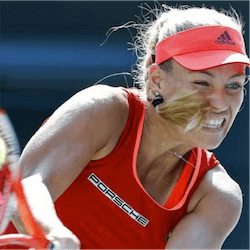 Carla Suarez Navarro will be returning to the Open to defend her title. If she can pull out another victory, the Spanish star will be joining an elite group of former two time champions that includes Victoria Azarenka, Maria Sharapova and Anastasia Myskina.

Tournament director, Saad Al Mohannadi stated that it is a great privilege for Qatar to host the Open for another year.

He said that Qatar has established itself as a home for tennis and this year’s open is set to be even better in all aspects than previous events.

Most fans will be checking out the top 5 seeds appearing this year to challenge Navarro. Angelique Kerber, Garbine Muguruza, Agnieszka Radwanska, Karolina Pliskova and Dominika Cibulkova will be competing for the prize money and Open trophy this year.

Kerber probably has the most to prove this year after a poor finish to 2016. She had a surprise defeat in the Zheng SaiSai.

This follows her defeat by Serene Williams in the Australian Open. She fell out of the 2017 Australian Open in round 16 so Qatar will be her proving ground for the rest of 2017.

Muguruza who has at 23 already won three titles in single play, including a massive upset against Venus Williams for the 2016 French Open title. This victory alone will have many fans putting their hopes on this young athlete.

Radwanska is the number 2 seed for the Open is looking to win her first title of the year.

Pliskova, currently ranked no 3 in the world brings the experience of five doubles titles and six singles titles to the Open. She is currently carrying a number 4 seed for the Open.

Finally the aggressive player, Karolina Pliskova brings another challenge to the Open. With an impressive 8 WTA singles and 2 ITF titles under her belt, she will be another player to watch this year.

She is ranked number 3 at the Open. She finished 2016 with the WTA finals title which made her the fourth player ever to win the title on her debut at the event.