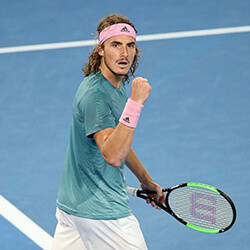 Stefanos Tsitsipas has beaten Spanish Roberto Bautista Agut at the Australian Open to reach the semi-finals after a superb game in Melbourne.

He is now set to take on 2009 winner Rafael Nadal, or unseeded Frances Taifoe of American. Talking to reporters after the game, Tsitsipas said that it felt like a fairytale, and that he was living the dream and living what he had been working for. He added that he felt emotional but he knows that he worked hard to get where he is.

Tsitsipas is the first Greek player to go past the fourth round of a Grand Slam tournament after he beat six-time champion Roger Federer, and pushed through to the semi-finals. He is also the youngest man in to reach the final four in the Australian Open since Andy Roddick, who earned the title in 2003.

Tsitsipas game against Bautista Agut proved why the young player is one of the hottest talents in tennis. Despite starting slow and dropping a serve in the opening game, he eventually picked up his form and quickly began to gain momentum until he and his opponent were fighting hard in an otherwise evenly-matched game.