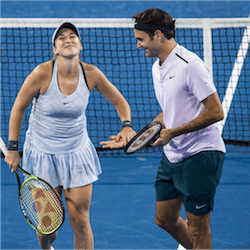 In Auckland, all eyes were on Julia Georges as she defeated Caroline Wozniacki to win the women’s ASB Classic. Meanwhile, over in Brisbane, her German compatriot, Angelique Kerber was battling it out in the Hopman Cup alongside Alexander Zverev. While Kerber won her singles match, Germany fell to the might of the Swiss as Roger Federer and Belinda Bencic picked up Sweden’s third Hopman cup Victory.

Federer found himself in a bit of trouble in the first set against Alexander Zverev. Despite hitting 20 winners, the 36-year-old failed to close down the set, giving Zverev the upper hand. In the second set, Federer found his groove, smashing winner after winner. The third went the same way as the Swiss master closed out the game, giving Sweden a 1-0 lead.

Speaking to the press, Federer said that he was actively trying to play as aggressively as possible. He went on to say that he thought that he played better when he was closer to Zverev which is why he approached the net more often. The tactic worked well for him and he was able to cruise through with the fast play close to the net. As for Zvereve, he has just won win from four matches in his preparation for the years first Grand Slam.

Victory for Svitolina and Kyrgios in Brisbane

The tie was forced to a mixed doubles decider thanks to a commanding display by Angelique Kerber. Under the guidance of her new coach, Wim Fissette, Kerber easily dispatched Belinda Bencic 6-4, 6-1. With Switzerland and Germany at a point apiece, the mixed doubles was set to be the decider. The combination of Federer and Bencic proved too much for the Germans as the Swiss wrapped up the match 4-3 (3), 4-2 to take a 2-1 lead.

Meanwhile at the Brisbane International, Elina Svitolina powered her way to victory over qualifier Aliaksandra Sasnovich. The world number six smashed a total of 10 aces and never faced a single break point as she cruised to her 10th career tour win. In the men’s final, it was good news for the home crowd as Nick Kyrgios won his first title on home soil.

After citing concerns about his knee injury, Kyrgios put on a stellar performance against American Ryan Harrison. After saving five break points in the first set, Kyrgios dominating the second set, easily closing out the match 6-4, 6-2.