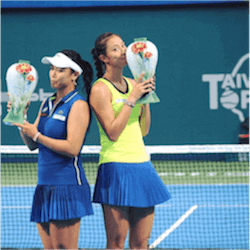 Officially, the People’s Republic of China still regards independent, capitalist Taiwan as a renegade province. That can make diplomacy tricky, as US President Trump discovered after an ill-advised phone call even before his inauguration. Happily, as the 2017 Taiwan Open demonstrated, the two states are at least exploring sporting ties, which is hopefully the first step towards less adversarial relations in general.

Both Chinas enjoyed high profiles in this second Taiwan Open, held in the Taipei Arena last week. The PRC’s Peng Shuai, ranked No. 59 on the WTA ladder, would have delighted any New Zealand punters willing to bet on an outsider in the singles tournament. After seeing off unseeded countrywoman Zheng Saisai in the Round of 32, Peng put paid to Czech fifth seed Katerina Siniakova’s hopes in the Round of 16.

In the quarterfinal, Peng then despatched Australian Samantha Stosur, No. 2 seed in the tournament. Czech Lucie Safarova, a Wild Card entry in the Main Draw, did well to make it to the semis, knocking out a couple of seeds along the way, but she also fell in due course to Peng. Eventually, however, Ukraine’s Elina Svitolina, the top singles seed, ended the Chinese player’s dream run to take the championship 6-3, 6-2.

Chinese dominance and the top seeds going all the way were also both themes of the doubles tournament. In the inaugural 2016 Taiwan Open, the doubles championship was won by Chan Hao-ching and Chan Yung-jan, sisters who are tennis heroines in Taiwan. Naturally, the Chans started the 2017 tournament as the top-seeded doubles team. They defeated another Taiwanese team, Wild Cards Hsieh Shu-ying and Hsu Chang-wen, in the first round.

The Chan sisters had no problem knocking out Poland’s Magda Linette and Montenegro’s Danka Kovinic in Round 2, and then scored a one-up on the PRC by winning the semis against Liu Chang and Zheng Saisai. The Taiwanese duo weren’t finished, however; they went on to claim a 6-4, 6-2 victory in the final, over the doubles second seeds: Czech Republic’s Lucie Hradecka and Katerina Siniakova.