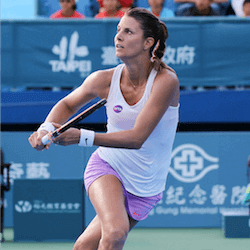 What tennis fans lost on the swings when the Thailand Open was discontinued in Pattaya after the 2015 tournament, they have gained on the roundabouts since this leg of the WTA Tour was relocated to Taiwan in 2016. The first WTA Taiwan Open at the Yang-Ming Tennis Centre in Kaohsiung last year proved a resounding success, living up to organisers’ hopes that it would stimulate global sporting interest in the tiny island republic, while expanding the popularity of tennis in the region.

For sports betting fans with a particular interest in women’s tennis, the Taiwan Open, with final qualifiers starting on January 28 and the tournament proper running from January 30 to February 05, fills the gap between the Australian Open and the Fed Cup nicely.

For players competing in the Australian Open, then the Fed Cup and going on to tournaments in Qatar and Dubai, the Taiwan Open is also convenient. It allows them an extra week of competition, with total prize money of US$500,000, while remaining more or less in the same time zone.

As a result of the response the first tournament generated, the 2017 Taiwan Open has been moved from Kaohsiung to the hard courts of the 10,000-seat Taipei Arena in Taiwan’s capital city. The 2017 field is also stronger, despite the absence of Venus Williams, currently Number 16 in WTA rankings, who won the 2016 singles title.

Top singles seed this year is world Number 13 Elina Svitolina. However, since 21 of the 23 players confirmed on the main singles draw are in the Top 100, and six of them in the Top 50, the 22-year-old Ukrainian will face enough competition to make the tournament worthwhile for New Zealand punters.

Misaki Doi, currently ranked at Number 42, is quite possibly Svitolina’s main threat. True, there are other, higher-ranked players in the competition: like Latvia’s Anastasija Sevastova at Number 35 and Frenchwoman Caroline Garcia at Number 24. However, as last year’s runner-up to Williams, Japan’s Doi is probably the player who is hungriest for the championship, with the most to prove.