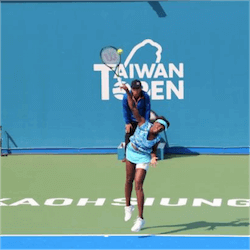 New Zealand tennis fans still have all eyes on the drama of the Australian Open, but the end of the month offers betting enthusiasts even more tennis. The Taiwan Open was added to the WTA Tour only last year, replacing the Thailand Open in Pattaya. It is scheduled to run at the Taipei Arena in the nation’s capital from January 30 until February 05.

Of the 23 women in the 2017 Taiwan Open main singles draw, 21 are ranked in the Top 100 on the WTA ladder, so punters can expect some quality tennis. The top seed will be 2017 Brisbane International semi-finalist Elina Svitolina. At World No. 13, she’s also the Ukraine’s top player, despite being dispatched from the Australian Open in Round 3 by Russia’s Anastasia Pavlyuchenkova.

Second seed in Taipei will be France’s Caroline Garcia, who also fell in Round 3 of the Australian Open, to Barbora Strycova. The 2016 French Open winner is currently at No. 24, nine places above the Taiwan Open third seed, Latvia’s Anastasija Sevatova, on the WTA rankings.

Three US Players in Top Eight

Czech Katerina Siniakova, World No. 37, isn’t playing in the Australian Open, but she’s seeded fourth in the Taipei tournament, thanks to her first WTA singles title win at the Shenzhen Open in China on January 07. The USA’s Alison Riske, at No. 42, was runner-up in Shenzhen, and is the seventh seed in Taipei.

Two other American players are among the top-rated Taiwan Open players: fifth seed Christina McHale, winner of the 2016 Japan Women’s Open, and Shelby Rogers, seeded eighth, who took a shock Australian Open first-round win over fourth seed Simona Halep, before being knocked out by Ashleigh Barty in Round 2.

The final player in the Top 8 for the Taiwan Open is the sixth seed, Misaki Doi. The Japanese World No. 41 was runner-up to Venus Williams at last year’s tournament final, so she has all the motivation punters could hope for as she starts the 2017 competition.