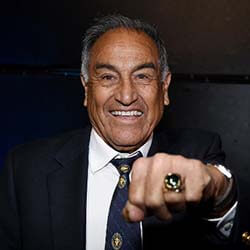 Former Wimbledon and Davis Cup champion Alex Olmedo has died. He was 84.

According to a statement released by the International Hall of Fame on Friday, Olmedo died of brain cancer, being information provided by his son, Alejandro Jr.

Born in Peru in 1936 before departing to the United States as a teenager, Olmedo attended the University of Southern California. During his time here, he won singles as well as doubles NCAA tennis championships in 1956 and 1958. Olmedo in 1958 led the United States team also to the Davis Cup trophy, and during that same year paired with Ham Richardson to win the US National Championships – the tournament that would later be renamed the US Open.

By 1959, Olmedo was living the prime of his career. Not only did he that year win the tournament now known as the Australian Open, but he also made the final at the US National Championships (US Open), and won the Wimbledon final against the legendary Rod Laver.

Alejandro “Alex” Olmedo was a terrific player and nothing short of a Davis Cup hero, said Stan Smith, president of the International Tennis Hall of Fame, following the news of the Peruvian’s death. His was a story of having come from humble beginnings, working hard and making extreme sacrifices, and ultimately seeing those sacrifices pay off by becoming a tennis giant and a Hall of Famer, Smith said.

Following his retirement from professional tennis, Olmedo went on to teach the sport for more than 25 years, with celebrities such as Robert Duvall and Chevy Chase counting among his students.