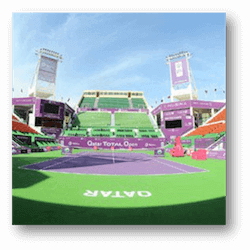 After the thrills of the Australian Open, there is still plenty of tennis action in the eastern hemisphere over the next few weeks, with the Taiwan Open in Taipei followed by a Fed Cup Round 1 clash between Germany and the USA in Hawaii. Immediately after the Fed Cup round, from February 13-19, the Qatar Total Open takes place in Doha’s Khalifa International Tennis and Squash Complex.

Since its inception in 2001 as the Qatar Ladies Open, the Qatar Total Open has showcased the growing interest in women’s tennis in the emirate, as well as revealing the tournament possibilities of Doha’s state-of-the-art stadium to a huge global audience. Kiwi betting fans will also appreciate the strong field the tournament has attracted this year. Of the 32 women in the 2017 singles draw, no less than seven are ranked in the WTA Top 10, including current World No. 1, Angelique Kerber.

Ironically, it is Kerber’s commitment to the Qatar Total Open that has made her unavailable for the German team in the first round of the Fed Cup, which ends on February 12. Even though the time difference means she could conceivably have made it from Hawaii to Qatar in time for the start of the Doha tournament, jet-lag would have left her at a considerable disadvantage.

Other Likely Contenders for the Prize Money

Kerber might be the top seed in Doha, but she faces stiff opposition from World No. 3, Poland’s Agnieszka Radwanska, as well as Czech Karolina Pliskova, Slovakia’s Dominika Cibulkova, and Spaniard Garbine Muguruza: World Nos. 5, 6, and 7, respectively. Briton Johanna Konta, World No. 9, and Russian Svetlana Kuznetsova, No. 10, are seeded sixth and seventh.

The 2016 Qatar Open Champion, Spain’s Carla Suarez Navarro, is expected to return to defend her title. Currently World No. 12, Navarro’s motivation will no doubt be further whetted by the chance to join the ranks of the only three other women to win the Qatar Total Open twice: Belarus’s Victoria Azarenka, and Russians Maria Sharapova and Anastasia Myskina.